As always, a little late but here it is.

Monday: Met up with some of my Hoot to Coast teammates for a run around the east side. It was hot and sweaty and we got blocked from our cars by a train at the end but it felt nice to push the pace after feeling so very slow for the last few months.

Tuesday: no soccer due to sore and tired knees.

Wednesday: track night got canceled and it was just too hot to go do anything.

Thursday: an early morning (but still really warm out) run around the waterfront which led to these two lovely photos.

Saturday: What was a plan for 18 turned out the be 20 miles. By far a personal distance record with me. My friend Gina. who was down to help me with Cupcakes for a Cure, wanted to run 6-8 miles with me but at 8 miles she still felt good and decided to keep running. By 15 miles I think she wanted to die. But she kept running and did the whole 20, because she’s crazy. 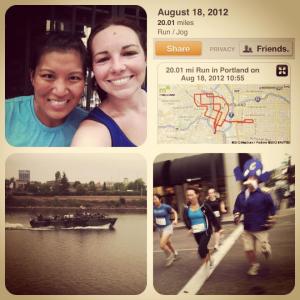 Overall: second 30 mile week in a row and I’m feeling it. But at the end of the 20 miler I felt like I could run another 6, the marathon is finally feeling doable!

46 days until the Portland Marathon!